Change, Justice & Freedom: See you in the liberation See you in the liberation, “Those who make peaceful revolution impossible will make violent revolution inevitable.”

Liberation comes from the people willing to stand up against the world for the sufferers. I will never pander to any animal abusers, direct or indirect, and my heart aches for the victims. Stop defending animal-abusing humans and defend the animals instead. As Harriet Beecher Stowe said, “It is a matter of taking the side of the weak against the strong, something the best people have always done.”

Everything on this planet, even justice-seeking world peace hypocrites, are against the animal rights movement. And I’m sorry that people get more prison years for freeing animals that evil people get for rape. I’m sorry to say that I’m no longer even shocked to see that this world cares more about spewing bliss and sunshine towards violent murderers rather than condemning them to an eternity of suffering, just like their victims.

Animals are born prisoners on death row for committing absolutely no crime at all. Their cages are prisons for blameless lives.

The humans in front of the cage are the ones who should be locked up.

Release the (farm, lab, research, circus, zoo, etc) animals from their cages/tanks and lock the humans in. Euthanize the animal-fighters and racers (dogfighters, cockfighters, bullfighters, horse racers, greyhound racers, etc) and save the animals! Hunt the poachers and the hunters, leave the animals alone!

And I do hope that every horrible thing that this species does to animals returns back to humankind tenfold because then they’d finally know what it is like to be degraded to nothing. And by them, I mean the direct animal abusers and the uncaring selfish human supremacists who don’t change their selfish ways even after finding out about the cruelty behind animal exploitation!

Oblivion can only last so long, and once you’re informed of the holocaust you’re participating in, there is absolutely no excuse to keep on continuing.

What’s done in the dark will come to light.

In Gary Yourofsky’s words, “We should try and reason with those who enslave and kill animals [the consumers who fund that cruelty]. But that process alone cannot produce freedom. The time has come to forcibly free animals from their captors, even if that means injuring or killing someone in the process. It is not violent to physically stop someone from killing someone else.”

Yes, I can’t bring back the trillions of slain innocents no matter how much I wish to, but I can, and will, avenge their deaths. I’ll use my anger to do the most effective and most thorough activism I possibly can. I may not be able to rescue every single animal on this messed-up planet, but I will try my very hardest to.

And I can only hope that you come to the right side of history.

Take off your blindfolds and open your eyes to the real victims of the planet.

Speak up, too. The animals don’t need your sorries; they need your empathy, your compassion, and your willingness to walk the talk and speak for them. If you don’t act, you have chosen the side of the oppressor.

The way that mankind treats animals is unforgivable and in a world infested with people who don’t care about animals, be someone who does. Go vegan and stop abusing animals today. Be the voice of the innocent, the exploited, the enslaved, and the murdered.

And you may say, ‘I’m only one person!’ but if you take the initiative to stop killing animals, you’ve saved the lives of that many animals. To you, they may just be one cow, one chicken, one fish, etc., but to them, that is their entire life. One person going vegan may not save the entire world, but it will save the entire world for those animals you save so I beg you to go vegan and stop killing them this very second!

There are no baby steps or compromises in an injustice. You’re either a victimizer or an ally, there’s no in-between.

And when you go vegan, you’re not giving anything up; you just stop stealing what was never yours. Why isn’t it obvious that animal bodies belong to them and them only?

So, from this second onwards, you’re going to make a choice. You’re either going to be radically kind, never tormenting an animal again. Or, you’re going to keep being radically evil, stealing babies, raping innocents, slicing their throats, objectifying their bodies, etc. 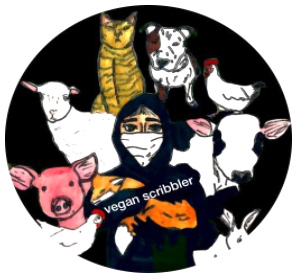 And I hope you make the right choice, which is leaving the animals alone and respecting their existence on this planet.

I’ll see you in the liberation.

Question is…are we on the same side or will you still be an oppressor?

-Part One – ‘The Animal Holocaust: Finding flaws in our thinking ‘

Ms. Vidula is an eleventh grade student at Liberty High School, USA. She is a dynamic young girl who has a passion for animals and their well being. Her goal is to eradicate all kinds of animal exploitation from its roots. Vidula has a penchant for writing and expressing her views in a humane way, she loves music, tatt …more