Activist Jailed for 15 Days for Freeing Bear Cub from Trap

Animal rights activist, 50, who freed a crying bear cub from a trap is JAILED for 15 days but plans to appeal because she made a ‘moral decision’ so ‘he could run back to his mother’ 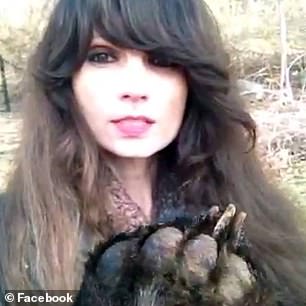 Catherine McCartney, 50, plans to appeal the sentence that was handed down to her on Tuesday by Municipal Court Judge James Devine

An animal rights activist who admitted to freeing a bear cub from a New Jersey trap has been sentenced to 15 days in jail.

Catherine McCartney, 50, stands by her actions and plans to appeal the sentence handed down to her on Tuesday by Municipal Court Judge James Devine. ‘These animals are innocent and so I made the moral decision to let the bear go so he could run back to his mother, and it was the right thing to do,’ the Vernon resident said in a statement obtained by NJ.com.

Because of previous convictions – McCartney was arrested at bear hunt protests in 2016, 2017 and 2018 – she was given the time behind bars.

Last fall, the woman was sentenced to 15 days but was allowed enrollment in the Sheriff’s Labor Assistance Program (SLAP) program by the same judge.

McCartney and 43-year-old Mark Nagelhout were both given three summons in October after they helped a bear cub escape a culvert trap at the Great Gorge Village condominium complex. Two culvert traps had been placed inside the condominium by the New Jersey DEP after two residents claimed that a bear charged at them.

DEP spokesman Larry Hajna admitted that the bear that was caught in the trap is a lot younger than the one believed to have been in the earlier incidents.

Activists in the community have dubbed the mischievous bear ‘Momma Bear.’

Both McCartney and the Park Ridge resident pleaded guilty to obstructing the administration of law and prevention of lawful taking of wildlife.

While in court, McCartney asserted that the dumpsters at the condominium were not bear-proof. She claimed that caused the bears to come in close proximity.

Nagelhout did not receive any jail time as it was his first offense, but both of them were hit with a $1,316 fine.

‘We believe the penalties are extremely high and will be appealing,’ said Doris Lin, an attorney with anti-hunt Bear Group. She represented both clients. ‘This bear cub was crying, and I think a lot of compassionate people would have done the same thing.’

Culvert bear traps tend to be about three feet in diameter and are triggered when an animal pulls on a bait bag. A door then closes behind the animal.